In today’s tight labor market, employers must get creative to fill vacant positions to keep their businesses operating. A recent panel discussion presented by the Center for Free Enterprise addressed one way to combat a labor shortage while helping companies fulfill their diversity and equitability missions.

The Business and Ethical Case for Second Chance Hiring focused on an untapped and underutilized source of employees: people with criminal records. The panel was made up of second chance thought leaders, human resources professionals, and a former inmate who is now a successful software engineer. The event on April 1 kicked off Second Chance Month.

Jeff Korzenik, Chief Investment Strategist for Fifth Third Bank and author of a recently published book on the subject, gave insight into the labor shortage caused by the aging of the American population, birth rates dropping since the 1990s, and a large number of workers leaving the workforce during the pandemic. “The business community has to expect that they will have to dig deeper into the population to get the workers we need,” he said. “One of the best opportunities is to look to those people who have been sidelined from the labor force, or who have been underemployed… because they have a criminal record.”

Korzenik acknowledges that implementing a successful second chance hiring program takes commitment and work on the part of the employer, but there are organizations that help. Alex Love, Partner with Levelset, works with companies on the HR side of fair chance hiring, to evaluate and overhaul application processes and hiring practices. Love worked closely with panelist Robin Berry from the Rue Gilt Groupe (RGG) in Shepherdsville, Kentucky, to set up their program in 2019. RGG revamped their hiring policies, including “banning the box,” and began to hire candidates based on “their fit for the job, and not their past criminal history.” Since its inception two years ago, RGG’s transitional work program has been a successful way to staff their warehouse while giving valuable work experience and training to people reentering the workforce.

There are also organizations that work with the incarcerated before their release, to prepare them for reentry. Founded in 2010 at San Quentin prison, The Last Mile provides education and technology training to inmates. Its alumni include successful employees at tech companies like Slack, Square, Fandom, Checkr, and many more.

“We understand that successful reentry is about more than finding a job,” said Sydney Heller, Chief Program Officer at The Last Mile, who talked about TLM’s Impact Index for measuring success. “We also look at things like housing, community support, education…and how fulfilled and satisfied they are with the life they are living.”

One of TLM’s successes is Sumit Lal, who also participated in the discussion. Sumit spent five years in San Quentin, got his college degree inside, and went through the one-year TLM training program. He now works as a software engineer with technology giant Slack. Sumit called for employers to give returning citizens that second chance, and to consider if the information on the applicant’s background check truly matches the person applying for a position. “We are not our worst mistakes,” he noted. He also asked for grace from society in general, to be accepting of people who come from different backgrounds, who may be in transitional homes, or on parole. His goal is to change the narrative around those with criminal records. “One bad decision made in the past can be used against you for the rest of your life,” he said.

When asked what students or employees in non-hiring positions can do to help, the panelists urged the audience to simply start the conversation with their employers. “Considering that a large part of the problem is information that is prejudiced and is biased, and is just wrong, I think that everyone has an opportunity to make a difference by educating themselves,” and then having those conversations at work, said Sydney Heller. 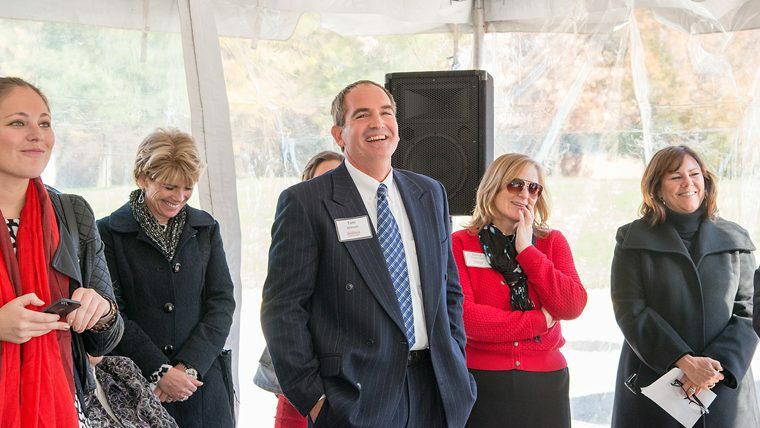 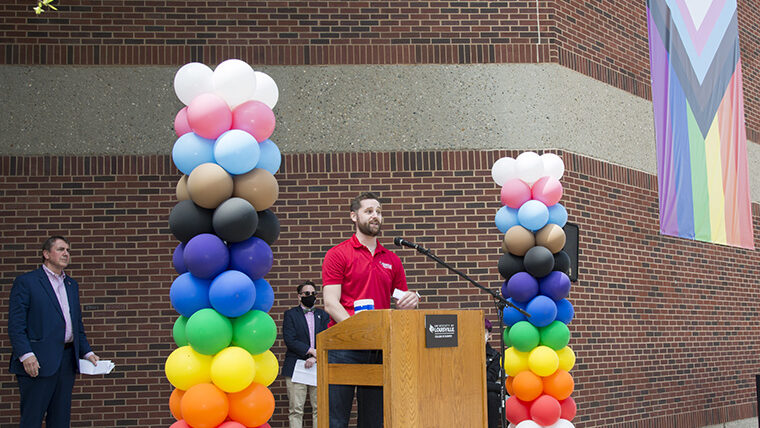 Pride Banner Signals Commitment to Being an Ally