My study abroad time in Den Haag is quite possibly the best experience of my life. I learned so much, grew as a person, and got to see a ton of amazing things the world has to offer. My only regret is that I didn’t stay longer. Great friends, a beautiful city, and memories that will last a lifetime gave Den Haag a homely feel that I believe is a very rare find. This adventure was truly the experience of a lifetime and I feel so lucky to have been given the opportunity to study there for the Fall semester.

Reflecting now, I can think of plenty of great things about the city itself, but I will start with the school. The Hague University is very different from the campus lifestyle we are used to at UofL. The entire “uni” is one building with four different sections. At first it was hard to wrap my mind around how 21,000 students studied in the building, but the structure and innovation of the building is nothing to sleep on. There are classrooms everywhere you look in each section of the building. The rooms allow a class size of about 20 to 30 students and there is one big lecture hall where Year 1 lectures are held. The professors are awesome. I loved every class I had just because of the unique personalities that each different professor had to offer. They made class enjoyable even when the material was not. I really enjoyed the schooling during my time because of the excellent staff and the distinct uni. My schedule allowed me to take Monday’s and Friday’s off. Six courses and twelve hours was a perfect workload for me during the semester. It allowed me to travel Friday through Monday almost every weekend. A normal day whilst in the Hague would consist of going to class in the morning, grabbing a bite to eat with friends or making a delicious meal, and just relaxing with great friends in our apartment which overlooked the city. I am a terrible trip planner and deal finder so I was lucky to have Corey and Albin to travel with. The food in Den Haag is different. Going to the grocery store once a week was normally enough to satisfy my hungry belly. If you plan on studying in the Hague, remember to save your cans and bottles! You can make a ton of money back on your drink purchases my just returning bottles and crates. It may even cut the expense in half. A unique treat that I loved dearly was kapsalon from my favorite Turkish kebab shop, Diva. My mouth is watering just thinking about it now. Kapsalon consists of fries smothered and covered in kebab and melted cheese with garlic and spicy sauce to accompany. All that is covered with shredded lettuce, tomato, and onion. A delicious midnight snack that I would even venture to say beats Taco Bell fourth meal. It is a must try in Den Haag. The greatest part of the entire trip was not what I expected. I expected to travel see the world and return excited to come home. That was the case, but with a little extra something. The friends I made in my time there are irreplaceable. This trip taught me that no matter where you are from or what past you carry with you, people are essentially the same. I have so many memories of times when I would be thinking the same thing as my French roommate, Antoine. We were so similar it was scary. I enjoyed every moment I had with him and the moment he dropped me off at the train station for my trip home, I felt like I was leaving a brother. I know that I will see him again and that we will be friends throughout our lives, but my bond with him is something very special and I will hold onto that forever.

Leaving Den Haag was bitter sweet. I am so grateful for the experience I had, but I was not ready for it to end. Emotions are running high as I’m writing this and that shows me how special it truly was. It tells me that it actually means something. It tells me that the words I am writing are genuine and true. I offered Den Haag my heart and soul on this trip and it filled it with love and memories I will carry with me forever. I thank my parents, UofL, all the advising staff, and the good Lord for the opportunity given to me. It really was the trip of a lifetime. Thank you for reading,

I can’t believe how quickly this semester has gone by, it feels like yesterday I got to Den Haag and now Christmas is almost here. Now that everything is all said and done here are all the places I got to go to. Antwerp, Belgium; Munich, Germany; Paris, France; Milan, Venice, Rome, Naples, and Pompeii, Italy; Madrid, Spain; London, England; Dublin, Ireland; and Den Haag, and Amsterdam, The Netherlands. Out of all of these here are my top three favorites and why. This is no particular order.

Venice while yes was very expensive was one of the prettiest cities. The city is quite literally a city on water. They have no streets and no cars. Everyone either gets around by boat or by walking. And even though it was the easiest city to get lost in I didn’t mind being lost because the city was just that pretty! Plus the food was amazing!

The best part about this city is for sure the people. I have never in my entire life met people who were so nice. The people of this city love tourist and genuinely wanted to help! Not only that but if you drive maybe 30-40 mins away from the city you can see the country side and the Ireland country side is one of the prettiest sites I have ever seen! The grass is a shade of green that you have never seen before! It’s just absolutely beautiful!

Pairs is again another pretty city but it’s because of its architecture. Every single building is pretty and worthy of a picture. Not only that it was the cleanest city I went to. I would also have to say that the over all atmosphere was probably the best part. It had that classy, but romantic feel to the city. Finally seeing the Eiffel Tower in person also made this city that much better. Seeing the Eiffel Tower is something I have always dreamed about, so to finally see it in person was literally a dream come true! This past weekend I had the pleasure to go to Prague. Prague was one of those cities on my short list of places that I for sure had to visit. I don’t know what it is about Prague that is so intriguing to me…maybe it is because it is the biggest city in Europe not affected by World War II which means original buildings. Either way, Prague is one of those cities that I would highly recommend you visit in your lifetime….and SUPER cheap. It is kind of confusing though to use the Czech currency because 100 Koruna is the equivalent of 5 USD which is hard to adjust to.

I got to Prague Friday afternoon and since it gets dark really early now, there wasn’t much to see. EXCEPT, the infamous European Christmas Markets are in full swing so I had the pleasure of walking around Prague’s market in the Old Town Square. The food was amazing to say the least. Everywhere you looked there was a stand selling sausages, ham, chocolate….you name it and they had it. 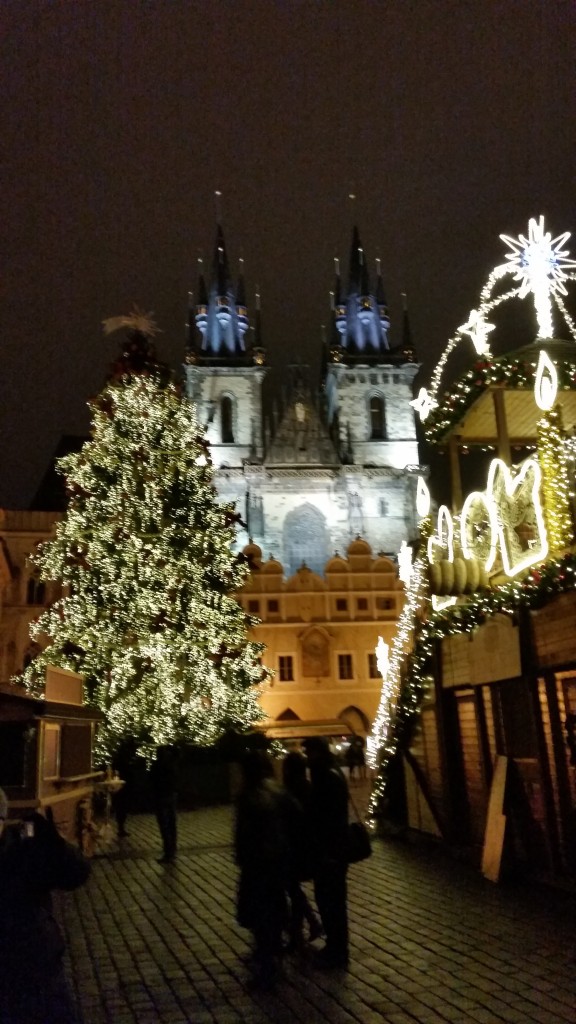 Christmas in Prague. The church towers in the background inspired the design of the castle in Sleeping Beauty

The next day was my city tour day. I did the usual free walking tour which gave pretty cool insight on the city. I was able to see the Astronomical Clock which is one of the top things to see in Europe but also one of the most overrated behind the Mona Lisa in Paris. On top of clock, we saw the Prague Castle which is the biggest in Europe, the Jewish Quarter, and Charles Bridge. The history behind Prague is pretty amazing and even though it has seen some turmoil over the years, a lot of it was ended peacefully which is pretty cool. We were able to get some really good at a traditional Czech restaurant where I got Beef Goulash which was tasty. The tour guide recommended this art exhibit called the Epic of Slav which gave a good history of the Czech people and it was pretty incredible. The paintings were massive and you got a handbook which explained what was going on in the picture which made it easy to follow 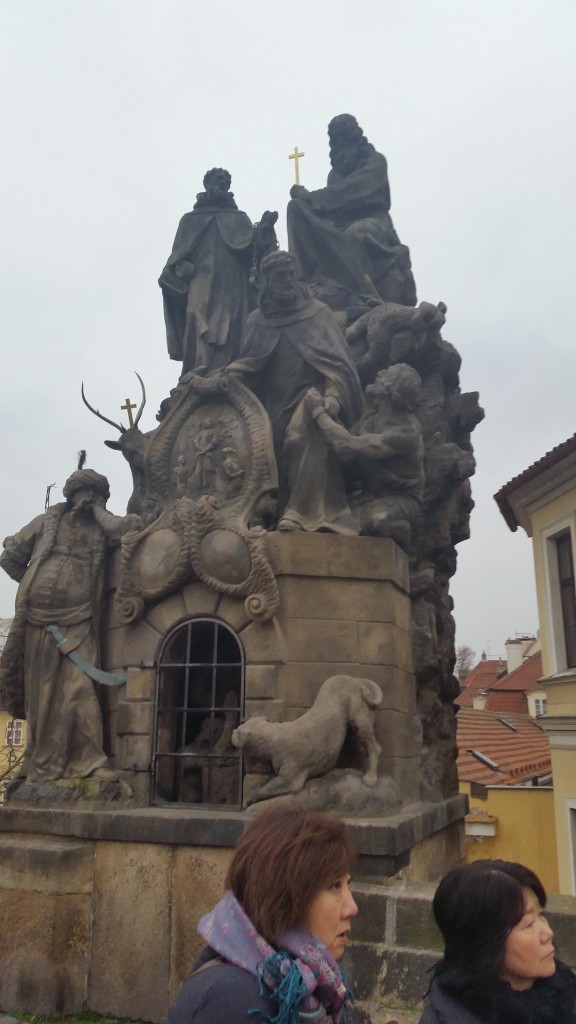 One of the many religious statues on Charles Bridge 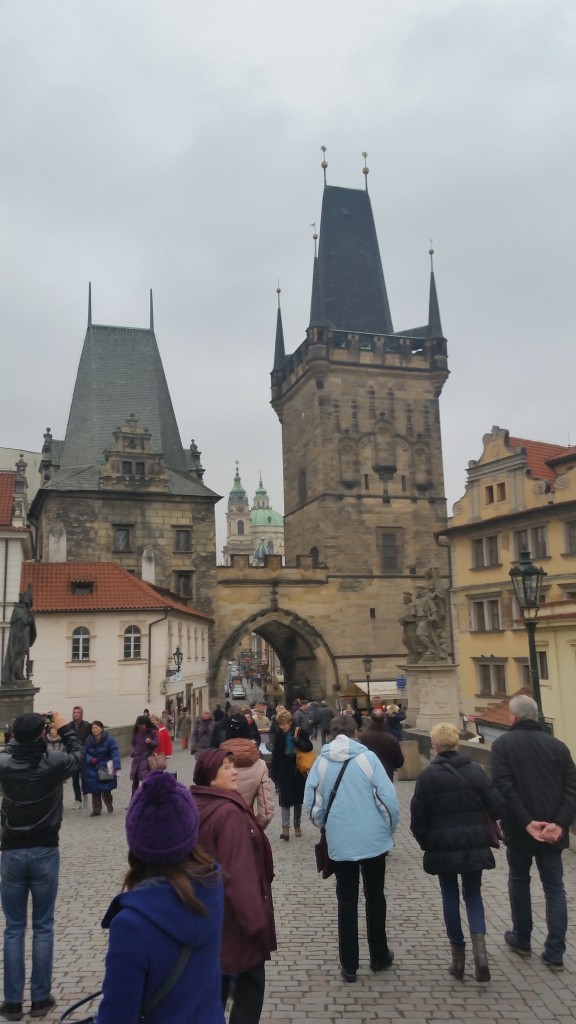 End of the bridge 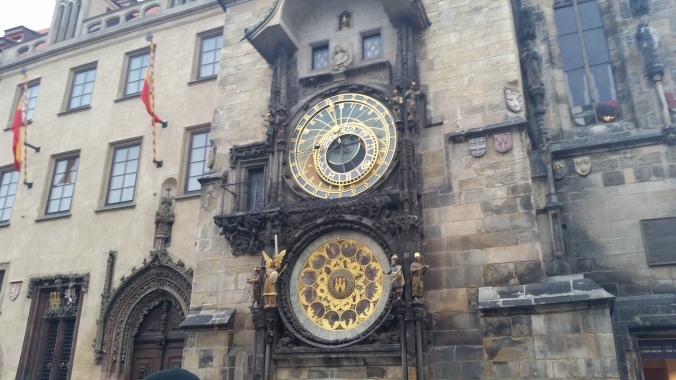 The Astronomical Clock. One of the oldest working clocks in the world. Pretty lame puppet show at the top of every hour 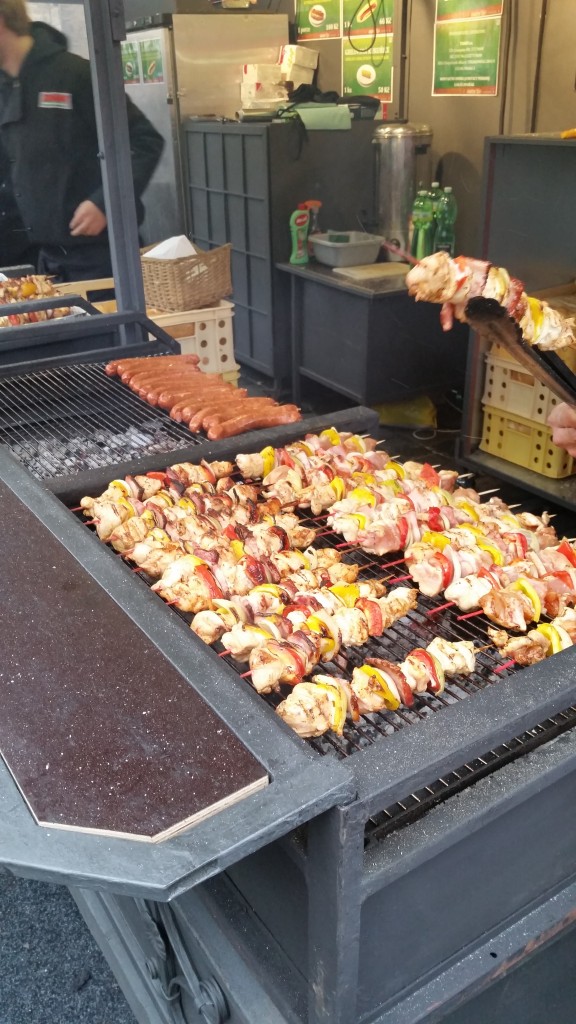 Food that will make your mouth water just looking at it. 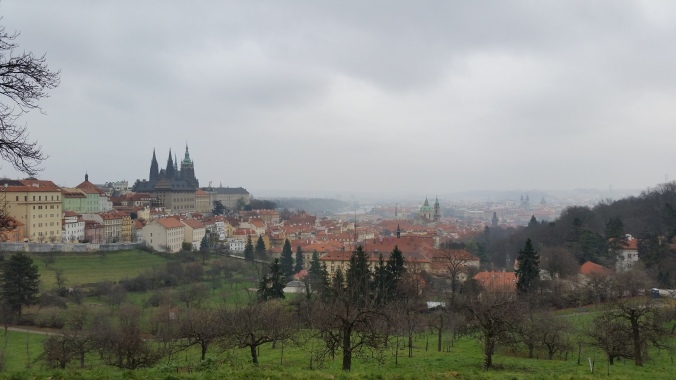 View of Prague. Prague Castle on the left side of the picture. 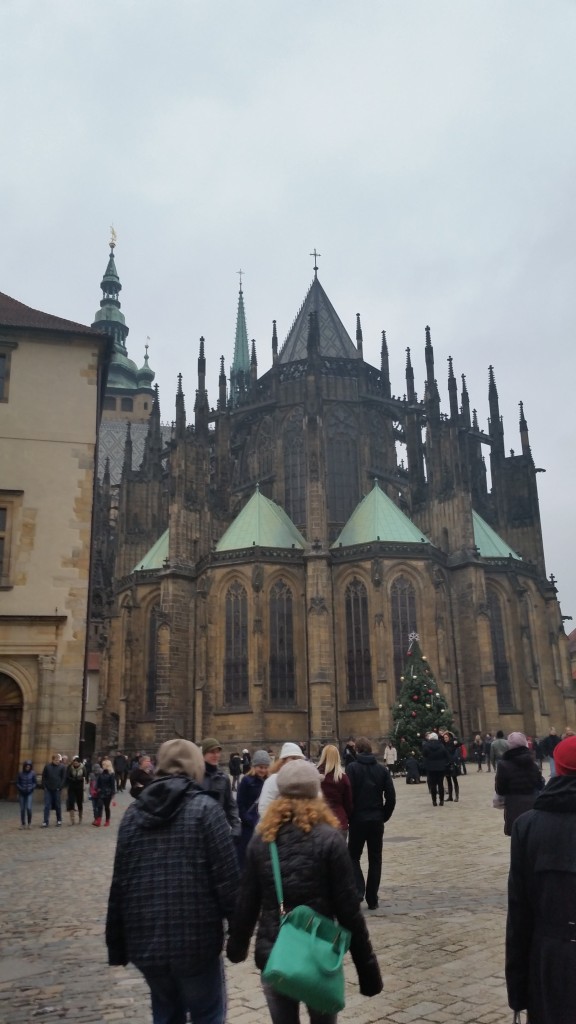 Back of Prague Castle 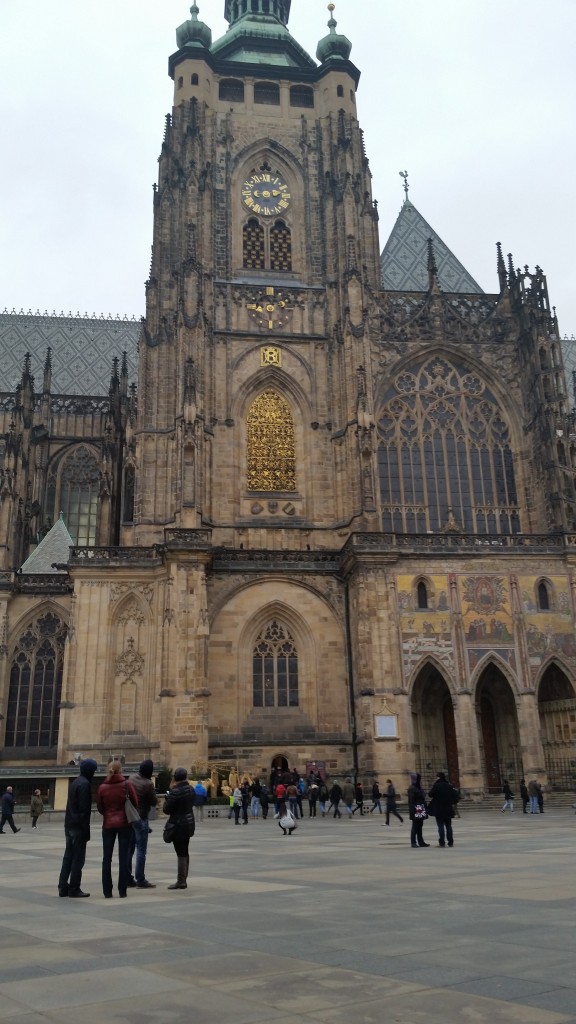 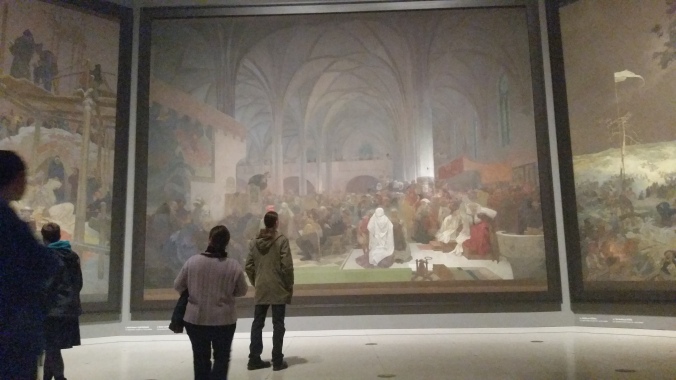 Massive paintings at Epic of Slav 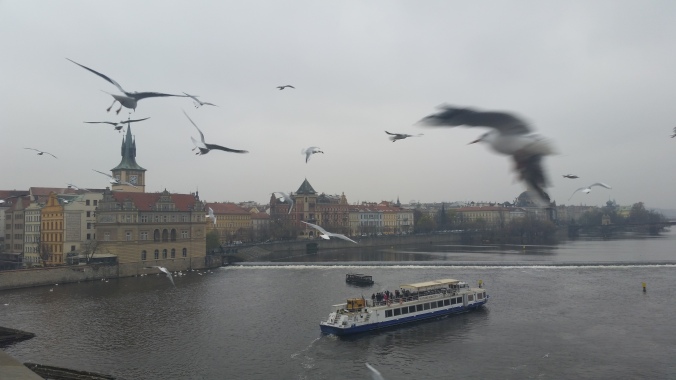 I met a couple of Aussies and Americans at the hostel that night and like me, they were kind of burnt out when it comes to cities so we looked for a place to hike the next day. We ended up finding this place north of the city called Bohemian Paradise. It is a natural park in the Czech Republic that is known for its natural sandstone and great features. The hike was long and the weather wasn’t that great (fog), but it was nice to get out the city and into nature with some cool people. 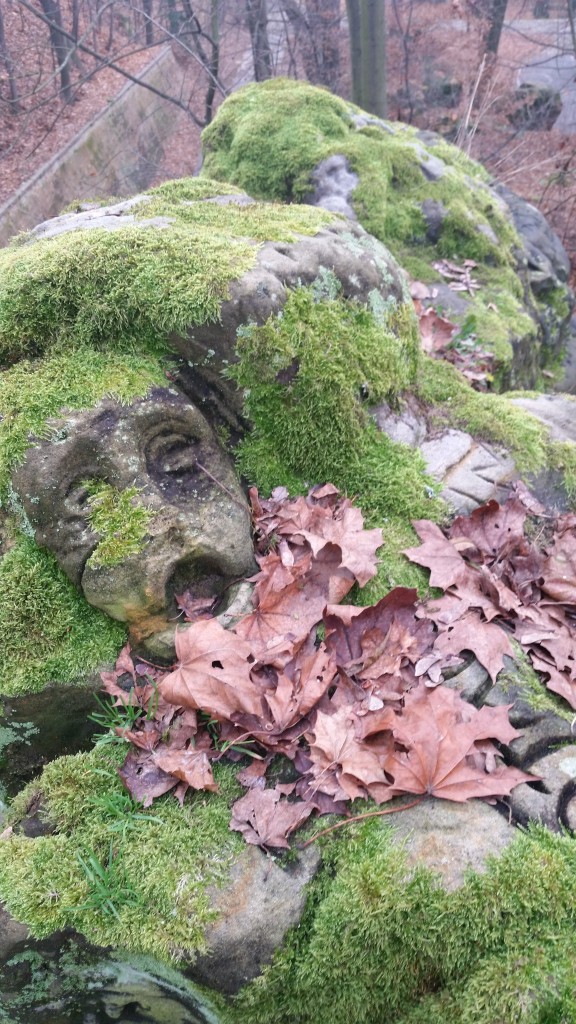 My flight was pretty late in the day on Monday so I looked for a place to hike to kill some time. There actually ended up being this really cool natural park between the city and the airport which worked out perfectly. There are the big rock cliffs that you could climb and some great trails. It was pretty good way to end the trip. 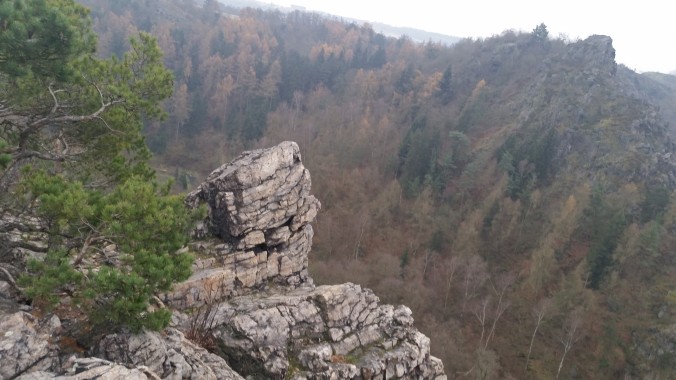 Exams are coming up this week so I have been trying to hit the books which has made it hard to blog. I have 5 exams (Booooo) but I stayed on top of my studying so they shouldn’t be that bad. Exams end the 17th and then I will be off to either Antwerp or Bruges, Belgium for a few days then back to the States for Christmas.

And the adventure continues,