At the end of my last post I had to leave in a hurry and can not imagine forgetting to tell you about some of the amazing things that are happening to me every day here in Florence.Â
Only having class three days a week and no other jobs to keep me occupied means that I have some time to actually enjoy life. It is beautiful all the things you can experience when you just let life happen. Like last week in my Tuscany and Its wine course, my professor and another student in the class (I think you would consider him a student but he is not there to get a degree but rather his wine certification) were talking as Melissa and I were getting our bags together to leave. They mentioned something about later that evening and going to share a bottle of wine with a mutual acquaintance. Somehow during their conversation Melissa and I got included in making the plans and the next thing I know we are meeting at a school building later that night to go for a glass of wine with our professor and Chase (the other student). Melissa and I had just anticipated a short walk to a small local bar, and a casual good bye not long after we arrived. As we started walking, we get to his car and go roughly 10 minutes outside of the “city center” to an elaborate hotel that I never would have considered walking into for fear that I might be charged just to look at it. I wish I knew the name, I honestly just tried searching the internet for an hour to find it and no such luck. So I guess you will just have to believe me when I say it was absolutely breathtaking. When we walked in there were not only one but two men holding both doors for us so we were comfortable and not cramped. Our coats were immediately taken to be checked, and we were guided to their restaurant for drinks. This place can hardly be considered a restaurant in my opinion because it felt more like your own private dining area if you were royalty.Â  The lights were dimmed, classical music was being played, there were vases of different nuts to eat while we waited, and the chairs were more like love seats. Chase and Mossimo (my professor) ordered their drinks but when they asked what Melissa and I would like, we said no thank you (again I could not barely afford to breath in this place, let alone drink.) They insisted that we have a drink and ordered us the closest thing to an Italian cocktail as you can get, a Negroni. Negroni when translated means Big Black. Now, I am not at all knowledgeable about many, if any liquors, so obviously if I don’t know liquors, I don’t know what would go well with them. So before I go on, the recipe for this drink is…

Â Â Â  * Stir with ice and strain into a chilled cocktail glass 3/4 filled with cracked ice. Add a splash of sodaÂ Â Â  water if desired. Garnish with a half slice of orange.Â

So I ask, “what is Gin anyway?” Heck I don’t know these things. All three just laughed at me and insisted that I would just have to find out for myself. I wasn’t even about to attempt to ask about the other two things. So anyway the drink comes and… 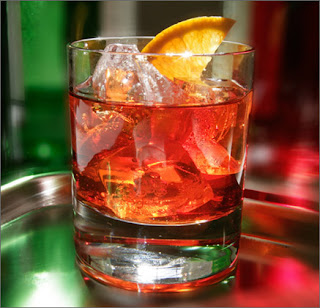 Looks pretty good right? Wrong! It tasted just a Christmas tree in a cup, and had a smell that made me want to gag. But me being the polite young lady that I am, spied it, smiled, and thanked them for suggesting such a good drink. It would have been torturous to finish it but luckily the room itself was so beautiful, I could not be anything but content. When we finished our drinks we got a tour of the hotel from the manager. Every room was perfect in its own way. There was not a single thing out of place. It was with out a doubt an experiences that I will remember forever. We were also invited back to tour the rest if we would like and I fully intend to take them up on that.

The very next day as I was just wandering around, I convinced Jen to go into a paper shop, Il Paprio with me so that I could pick up more stationary to write letters on. We were greeted by a very friendly older man who stuck up conversation with us like we had been old friends. This paper shop, along with many others in Florence, is full of marbleized paper. Very pretty and colorful papers that are created by using wallpaper glue and water based paints to create a design that can be then copied onto paper.

Video on how to make the paper. 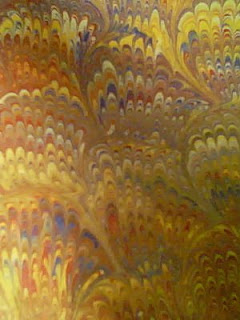 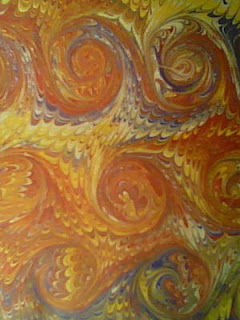 The old man, Gianni, took us over to his little station and insisted that Jen and I make a design to have a hand made souvenir of our time here. The pictures above are of the paper that her and I created together. The only thing was, he said if he gave us out work we were not allowed to fight over it, so to respect what he said we have decided to cut it in half before we leave so we both have a little bit to take back with us.

It is a beautiful thing to have experiences like these without ever even expecting to. There are nice people in the world, and I have been lucky enough to meetÂ  a few of them right here in Florence.